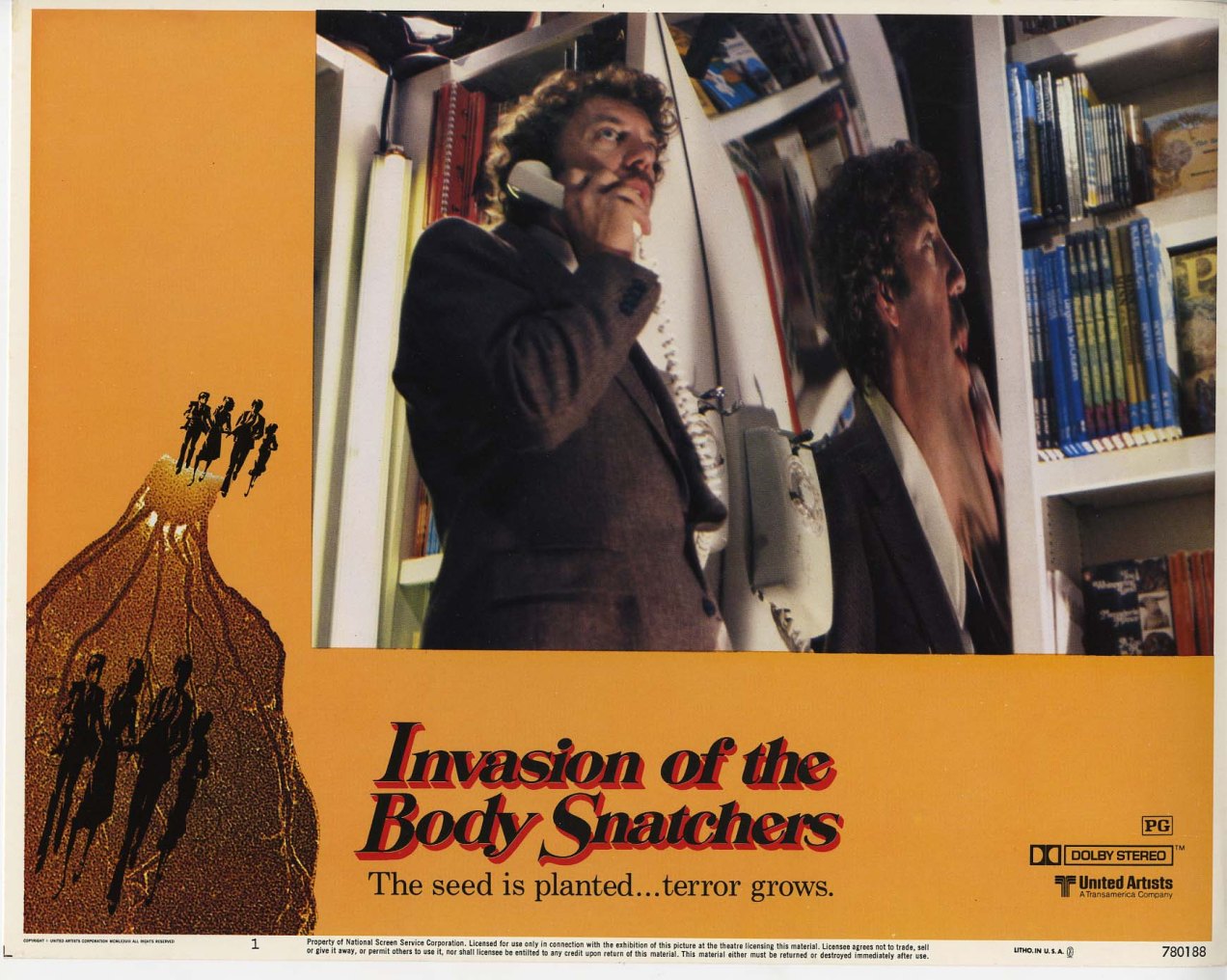 It’s a commonly recited refrain that the film industry’s fondness for recycling material is stifling creativity, or more simply ‘remakes suck ass dude’, but Jack Finney’s 1954 science fiction novel Invasion of the Body Snatchers has proved fertile soil for the cultivation of American nightmares. Don Siegel’s 1956 film slyly presented a paranoia that can be read as either fear of communism or McCarthyism. In Philip Kaufman’s 1978 remake this becomes something else, expressing a fear of conformity, urban alienation, the breakdown of community and the social paranoia of being an outsider.

Elizabeth Driscoll (Adams), a scientist working for San Francisco’s public health department, begins to suspect there is something wrong with her husband, a rather self obsessed dentist. The banality of her suspicions – the sport loving spouse gives up some baseball tickets – means that she has difficulty articulating them to her friend Matthew Bennell (Sutherland), a health inspector we first meet fishing for rat turds in a posh restaurant’s soup with barely hidden glee. As the husband’s actions grew weirder and her panic and terror grow, a concerned Bennell presses her for an explanation. That he does not immediately scoff may be explained by the fact that he is clearly in love with her.

Kaufman starts out with a gentle heat under his pan of liquid paranoia. An eerie space-set credit sequence and Denny Zeitlin’s initially retro 50s score serve to deceive the audience that they are about to watch a cosy updating of a film that they perhaps falsely remember as a camp classic. Before suddenly being pitched into modern San Francisco (of course period San Francisco now). Kaufman expertly orchestrates subtle background details to create a creeping unease. Things in the background of the frame are subtly ‘off’. The metal on metal screech of a rusty children’s park swing is revealed to be caused by a priest – a blink or miss him appearance by Robert Duval; a man runs across a crowded square in abject terror pursued by… no-one; the proprietor of a Chinatown laundry tells Bennell of the woman who just served him “that not my wife, that not my wife. She wrong.”

Bennell introduces Elizabeth to a psychiatrist friend (a great cameo from Leonard Nimoy) who dismisses her fears the marital blues of a bored wife in a casual enforcement of patriarchal values. However he is soon dragged into the growing conspiracy when another friend of Bennell’s, poet Jack Bellicec (played by a young Jeff Goldblum) is discovered mid transformation by his terrified wife (Veronica Cartwright, this movie has a terrific cast) while relaxing in the bath house they run.

From this point Kaufman turns up the heat. The paranoia boils over in a superb scene where Bennell tries to use his position in public health to take his suspicions to the mayor. Bennell is seen talking on the phone first at home and then in a succession of public phone booths due to growing suspicions his phone is tapped. The camera slides into ever more skewed angles and editing becomes frenetic as he is sucked into and neutralised by bureaucracy stuck in a loop of obstructive PAs and piped musak.

Kaufman and screenwriter W.D. Richter (whose debut was great but forgotten road-slash-caper movie Slither and also scribed John Carpenter’s Big Trouble in Little China) take Finney’s tale and graft it onto the seventies conspiracy thriller, it even shares locations with Coppola’s The Conversation (in particular San Francisco’s Union Park). Upgrading the setting from small town USA to a major urban metropolis is obviously ambitious, but it really works. The sheer speed and ease of the alien takeover create an oppressive sense of doom and hopelessness from the off. This is supported by the melancholy tone of Bennell’s unrequited love for Elizabeth which only becomes overt far too late. The seventies were a time when major studio films could easily cope with downbeat endings, perhaps reflecting of audiences own cynicism in a period of American history characterised by loss of innocence caused by the end of the hippie dream, Vietnam, and Watergate.

It was likewise a time when a genre picture could feature a cast of adults, not teenagers or Sports Illustrated models. Sutherland’s wonderful hangdog expression, tache and hairstyle have a definite and Joy of Sex model feel. A major star at the time Sutherland is a long ways from Daniel Craig (the hero of Oliver Hirschbiegel’s atrocious noughties remake The Invasion). Even Goldblum had yet to start hitting the gym for The Fly. Cartwright and Adams both convincingly embody real women and have (shock horror) actually defined jobs.

After the long slow build up the film really brings the nasty with an incredibly yucky scene. The increasingly isolated group fall prey to exhaustion because they have been awake too long (the body snatching process occurs in one’s sleep). Awoken before the process is complete to discover their partially formed doppelgangers growing in Bennell’s garden they react with abject horror. Startling latex special effects exploit the ‘uncanny valley’ to great effect. This is a hypothesis that the closer to perfection a synthetic copy of human features becomes the greater the feeling of revulsion triggered by our confused emotional response to it. There is something truly repellent about the fake Bennell’s foetal expression and not quite formed adult features (especially the tache, I had nightmares about that tache).

This is a fantastic remake; the players are excellent and despite the fantastical nature of the material plays their parts entirely naturalistically. Kaufman directs with style and panache, making expressive use of camera angles, and San Francisco locations are wonderfully captured by cinematographer Michael Chapman (who shot Raging Bull and Taxi Driver). The screenplay is smart and the pacing perfect even if may seem too measured for some contemporary sensibilities. The atonal, semi electronic score adds a lot the powerfully evoked mood of flesh crawling unease, sadly composer Zeitlin, a jazz pianist and psychiatrist (which makes him sound like a David Cronenberg protagonist) was so worn out by the experience that he refused all offers to score again and this is his sole credit.

The film has the muted tones and slightly soft, washed out colours of a seventies film and the latest Blu Ray transfer Arrow Films’ 2013 UK release captures them excellently without ramping up the colours as so many HD versions of films from this period do. There is visible grain and the night seems to have a somewhat foggy sheen that is most likely an effect of the film stock. It’s not often cited alongside the conspiracy films of the period due to it’s science fiction plot but it joins a lineage of paranoid sci-fi that includes John Frankenhimer’s Seconds (1966), Robert Wise’s The Andromeda Strain (1971), and Peter Hyams’ Capricorn One (1977). In fact, there is enough SF elements Alan J. Pakula’s The Parallax View (1974) that you could throw that in too. The Blu Ray has the original stereo track and 5.1 remix, but the surround track adds little (although the dialogue occasionally seems to fade in the mix).

Kaufman’s remake was followed in 1993 by Abel Ferrara’s Body Snatchers, a more disreputable and comic book treatment of the material but one that is also excellent (and the only version to attempt Finney’s wickedly subversive ‘happy’ ending). Then Hirschbiegel blotted the copybook. The time is right for a connected, social media conscious version of the tale. Let’s see the Body Snatchers take to Facebook.

A version of this review was originally published on http://www.veritefilmmag.com