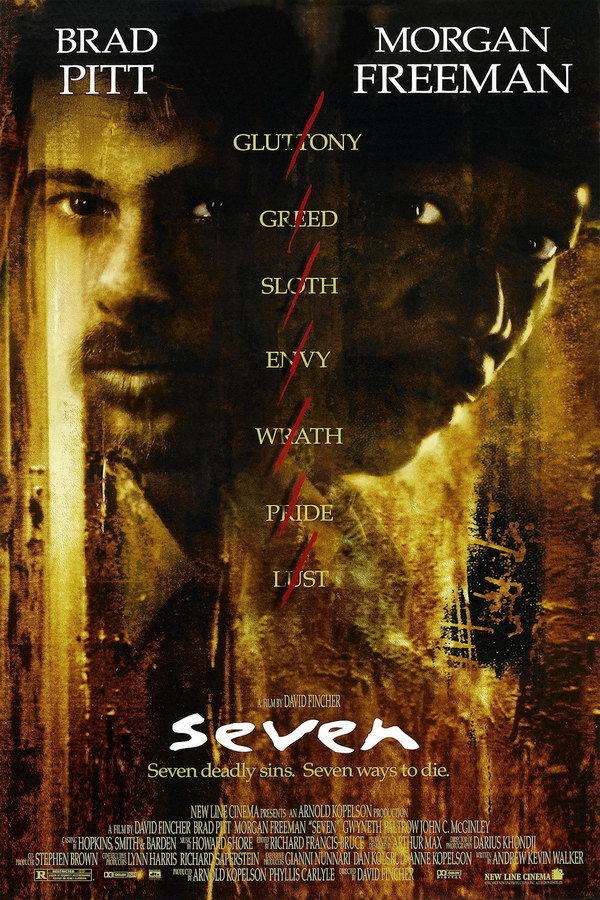 This article was first published in the January 2015 issue of Verite Film Magazine. Before you proceed this was for a running feature called ‘In the frame in which Verite writers wrote about their favorite scenes in movies. This was my one entry in the strand and looks at a scene from near the very end of director David Fincher’s 1995 masterpiece of neo-noir horror, Se7en. If you haven’t seen the movie and you read this, I will personally visit you in the night and force feed you Spam till you burst. Spoilers okay! You have been warned.

“Whatever you hear, stay away! John Doe has the upper hand!”

These words are the fulcrum upon which David Fincher’s 1995 thriller Se7en tips away from the stylised police procedural it disguises itself as, and descends into a dark pit of suffocating horror.

Detectives Somerset (Morgan Freeman) and Mills (Brad Pitt) are assigned to investigate the possible homicide of a morbidly obese man discovered dead in a filthy apartment. It should be a routine case, a simple crime-scene investigation for detective Somerset as he approaches retirement, and for Mills a young replacement who has transferred in from outside the city. A further murder and several pointed clues lead Somerset believe they are the work of a serial killer and theorise that they are creating murder set-pieces based on the seven cardinal sins (gluttony, greed, sloth, lust, pride, envy, and wrath).

The two detectives are archetypal crime fiction characters. Somerset the veteran, approaching retirement with a mix of relief and exhaustion. The geniality and warmth that Freeman brings to the part tempered by his habit of keeping a switchblade on his person (just like Harry Callahan). Somerset has been worn down by the unrelenting conveyor belt of atrocities the city provides. Mills is the ambitious young detective, full of piss and vinegar, brimming over with fierce conviction. Freeman and Pitt do great work bringing these stock characters to life, greatly aided by Andrew Kevin Walker’s sardonic hard-boiled dialogue.

If characters and set up appear the stuff of hokum, Walker’s wickedly cruel, deceptively clever plot is using familiar tropes against the audience, building a sense of the familiar that for all its shock tactics is, in genre terms, apparently formulaic. An accumulation of procedural detail and Chandler-esque sleuthing lulls the audience into a sense of security that is suddenly obliterated when rather than being captured by the guile of the detectives; the killer simply walks into the fourteenth precinct of his own volition and surrenders. It is a moment of narrative transgression; the heroes are instantly emasculated, robbed of agency. It is the first real sign that we are watching a horror film.

Known only as John Doe the killer has been built up as the absolute personification of evil by each of the meticulous and horrific crime scenes he has left in his wake. Somerset warns Mills, “If we catch John Doe and he turns out to be the devil, I mean if he’s Satan himself, that might live up to our expectations, but he’s not the devil. He’s just a man.” For his part Mills is unimpressed such gravity towards their quarry, “C’mon, he’s insane. Look. Right now he’s probably dancing around in his grandma’s panties, yeah, rubbing himself in peanut butter.”

Detective Somerset’s dialogue can be read as a self-reflexive commentary on the inevitability of anti-climax in the mystery genre. The chase is often the greatest thrill, and when the killer is revealed as a mere mortal the detective and by extension the audience is left deflated – this problem is endemic to Se7en’s plethora of imitators. Denzel Washington starrer Fallen, even went so far as to have its killer actually be a demon.

Putting aside disruptions of genre caused by the killer’s surrender, Doe’s physical entrance in the shape of an uncredited Kevin Spacey (a trick it is hard to imagine being successfully mounted today) appears to confirm that Somerset was correct. He is rather ordinary, the sort of man your eyes slide over without registering. Spacey was a notable actor in 1995 but not yet a household name and his ability move from ‘white-collar bland’ to ‘personification of capital E evil’ was not yet something to which an audience was accustomed.

With perverse visual irony as the film sloughs its crime movie skin to reveal glistening scales beneath, it also moves out of the darkness in which cinematographer Darius Khondji has shrouded its vision of Los Angeles, less a City of Angels more a purgatory whose denizens are in bondage to their basest vices. Although in custody, Doe informs the detectives that he will lead them to the bodies of his final two victims. Reluctantly they agree and begin a journey out of the uncannily rain soaked streets of LA and into the blazing sun of the Southern Californian desert.

It is a visual journey that echoes a passage from John Milton’s Paradise Lost that is prominently featured in the movie, “long is the way, and hard, that out of hell leads up to light”. Doe and Fincher reverse Milton’s pilgrimage from the darkness of hell to the light of heaven, and create a movement where the illumination of light exposes greater gulfs of horror.

As they stop on Doe’s command in the literal middle of nowhere, a delivery van approaches and the killer begins his endgame. Doe has been gradually chipping away at Detective Mills mental state throughout the journey, and now reveals a worrying level of knowledge about his life and his wife Tracy (Gwyneth Paltrow).

As the van driver explains to Somerset that he was paid off the books to deliver a box, Doe turns the screws on Mills revealing the final two sins. Doe envied Mills’ life, but is scornful of the detectives’ indifference to his domestic bliss and his commitment to career. Envy is Doe’s sin.

Somerset sees the shape of impending doom approaching at precisely the same time as the audience, Fincher and Walker spring the film’s final trap. It’s not a twist as such, in fact in some ways it is thuddingly obvious, but it is the sort of ending that you might consider, and then dismiss as just too hideously bleak for a major Hollywood picture, ‘there’s no way they will go there’ you think to yourself.

“She begged for her life” smirks Doe… “and the life of the baby inside her.”

When Mills guns Doe down, and in the process commits murder, he becomes the final sin, wrath.

Se7en is a horror film because of inevitability: it allows no shaft of light to penetrate its bleak view of society as a scurrying hive of insects consuming one another in frenzy; Somerset and Mills never have a glimmer of a hope of catching Doe. This was his design, executed with brutal perfection.