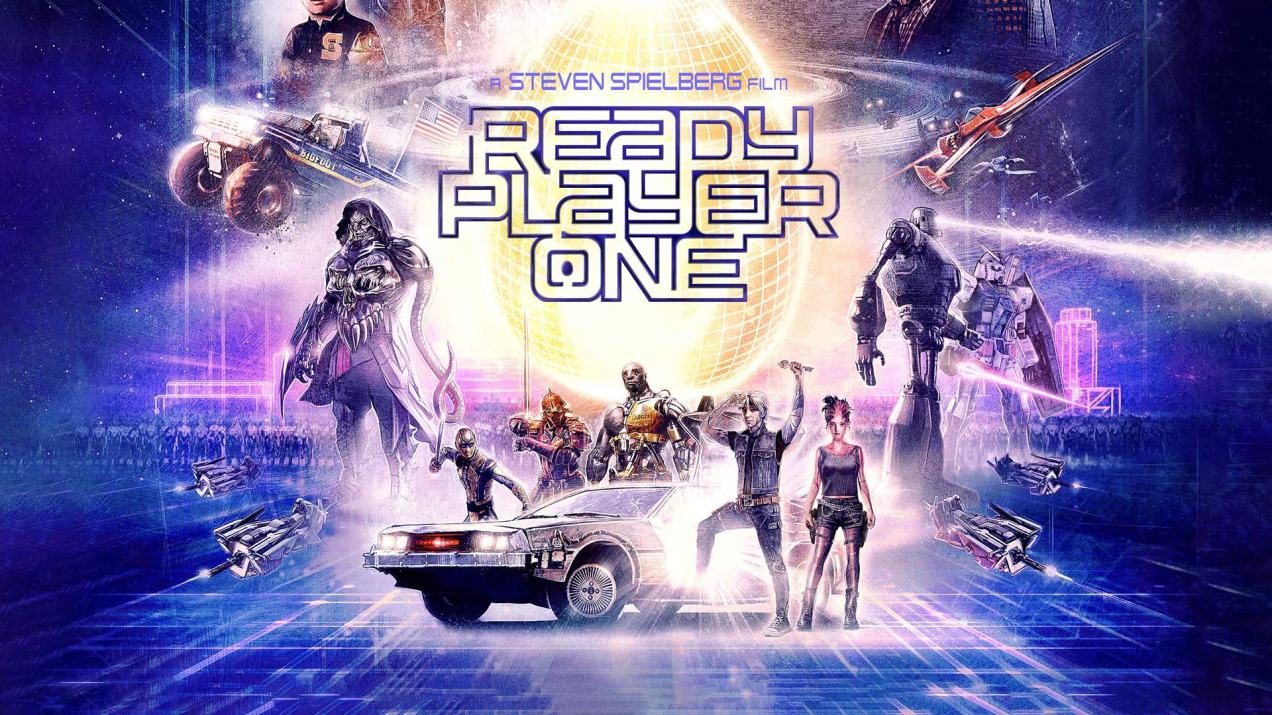 Here is my relatively spoiler free review of Ready Player One…

When 71 year old Steven Spielberg was announced as the director to adapt Ernest Cline’s 2011 novel Ready Player One, I will admit I felt trepidation. Cline’s novel is a candy floss day-glow, neon-cyberpunk confection. Cyberpunk may seem the most Generation X of any literary genres, but in fact its creators come from the previous generation — William Gibson is only a year younger than Spielberg. Cline updated cyberpunk with references to gaming, and moved its pop culture references from film noir, punk rock, Raymond Chandler, and Dashiell Hammett to John Hughes films, prog rock, and Pac-Man. Not a progression exactly, but certainly a sideways step. If I had been given a choice of director to adapt the novel, I would have gone straight for Edgar Wright.

Now Spielberg’s Ready Player One is with us, and frankly, it makes me feel like a bit of a twat. Because it is FANTASTIC. And Edgar Wright agrees, describing the film on Twitter as an “audio visual feast”.

Set in 2045, after the ‘corn syrup wars’, there has been a global economic collapse and most of the world’s population lives in abject poverty. Reality is so bleak and depressing that people now spend as much of their time as possible in the Oasis, a massive, multi-player, virtual universe created by James Halliday, (Mark Rylance). But Halliday is long dead. After his death he revealed a contest, a quest hidden within the digital fabric of the Oasis based on clues drawn from his own love of 70s and 80s pop culture. Anyone who solves these clues will win unimaginable wealth, and more importantly full control of The Oasis, which has become the world’s pervasive entertainment and information medium.

Such is the significance of this, that Innovative Online Industries (IOI), (the Apple or Microsoft of this bleak world), is investing billions of dollars in trying to crack Halliday’s puzzles and sieze control of The Oasis. In opposition to this fascistic corporation, there is a grass-roots anarchist collective endeavouring to crack the code.

Our hero is Wade Watts (Ty Sheridan), an apparently average teenager living in Columbus, Ohio. Wade lives with his aunt as his parents have died. The live in ‘The Stacks’ a vast slum in which static caravans have been laid on top of one another to create a vertical trailer park (a very JG Ballardian image). Wade represents an everyman character, but when his virtual alter-ego ‘Parzival’ becomes the first to crack Halliday’s first clue, he becomes an instant online celebrity, and a target for IOI’s ruthless head of Ops, Nolan Sorrento, (Ben Mendelsohn). Wade also meets Art3mis, (Olivia Cooke), another Oasis player of repute with whom he is instantly besotted. Even though, his best online buddy Aech warns him that she could be a middle-aged dude.

Strip away the cyber-punk trappings of this plot, and it is a simple and archetypal hero’s quest. Wade and his friends must come together and overcome a series of tests to win a holy grail. In opposition are the forces of darkness and squaredom, represented by sneering Mendelsohn and former Silicon Valley and current Deadpool comic relief T.J Miller as i-R0k, a kind of digital Oddjob to Sorrento’s Goldfinger. 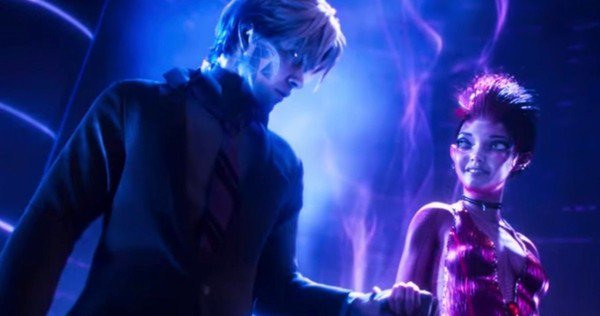 Ready Player One comes trailing a certain amount of controversy. Whilst (or perhaps because) Cline’s novel met with stratospheric commercial success because it is extremely witty and entertaining, it is also somewhat juvenile in places. The novel’s sexual politics are particularly adolescent and clumsy. This coupled with clear jealousy of an unwashed nerd becoming successful, generated something of a backlash, particularly on Twitter.

Cline is credited as co-writer of the script for the movie, but the hand of the more experienced Zak Penn has clearly shaped and guided the direction of the film adaptation. The film shaves away many of Cline’s nerdier flourishes (sorry Rush fans), tinkers with the romantic dynamics of the plot taking away a problematic narrative reveal about a character’s sexuality that seemed like a cop-out in the novel, and builds up the diversity of the film’s heroic Scooby gang. Not unlike Black Panther, the film’s clear hero emerges as far less interesting than his supporting crew. Ready Player One’s MVP is Olivia Cooke. Art3mis is smarter, cooler, and wittier than Parzival, and Cooke delivers one of the best performances in the film.

Penn and Spielberg are intent on making Ready Player One as fun as possible. They greatly dial back the grimness of Cline’s real world setting. In the novel, Innovative Online Industries may as well be the Nazi Party. Spielberg softens the fascist corporation, making Sorrento more of a ‘bad apple’. I’m sure many will see this film as Spielberg and Zak Penn ‘dumbing down’ Cline’s vision, but I don’t see it that way at all. Spielberg is among our modern masters of cinema, and cinema is a visual medium. Whilst the narrative of Ready Player One streamlines the novel, and tidies up its ideas, the film gives them full flight to them visually. Alex Garland’s over-lauded adaptation of Jeff VanderMeer’s novel Annihilation, greatly scaled down the books surrealistic horrors. Spielberg dials up Cline’s video game influenced action. An early action sequence involves a virtual reality road race, in which the rules of physics are thrown away with gay abandon. This is an astonishing sequence, that melds pure hi-octane action movie thrills, with a multitude of visually satirical gags. Like a Royal Rumble in which Harold Lloyd, Matt Groening, Hal Needham, and William Friedkin are trading blows. The sequence (which is then wittily visually deconstructed) reminded me of the craziest and most excessive levels of Sonic Adventure.

Spielberg paces the film as a constant onward rush of eye candy and excitement, like a particularly garish on-rails shoot-em-up. This is at times to the detriment of the plot. Cline’s novel spaced out the action and gave the characters more time to breath. However, Spielberg seems intent on providing a good time above all. He may have his bus pass, but this feels like the work of a young director. While we have been bemoaning the lack of a decent video game to film adaptation we have been looking too literally. Video games have hugely enriched film, but the great video game movies have not been adaptations, they have been The Matrix, Scott Pilgrim, Edge of Tomorrow, eXistenZ, and Ready Player One.

Spielberg may be 71, but he remains one of the great action directors. CGI heavy action sequences can seem sterile and (ironically) video-game like in the hands of other directors. The large scale battle scenes of Ready Player One are engaging not only because the director can pace a sequence so well, but also because the script fills them with visual gags and character beats. It’s not just a bunch of stuff happening, you know where, when, and to whom. And most importantly you care about it.

It’s not all gravy. Spielberg also has a tendency to slide into mawkishness, and he certainly does that here especially in the unnecessarily prolonged final ten minutes. While the film is laudable for its diverse casting the central relationship between Cooke and Sheridan’s characters does overshadow interesting performances from Lena Waithe, Philip Zhao, and Win Morisaki.

There has been a lot of snark on social media, where Ready Player One and Ernest Cline seem to have become whipping boys for the painfully ‘woke’ about this film being a vacuous exercise in nostalgia. I think something more complex is happening. Ready Player One, both novel and film, surf the contemporary zeitgeist. They see how we are moving towards an entertainment culture where the medium is greater than the message. As we demand our entertainment streamed at the lowest cost to the consumer, it is harder for genuine creatives to make a living. At the same time the owners of the delivery medium (be it Amazon Prime, iTunes, or Netflix) are raking in the cash in subscriptions. Originality is less and less significant in the face of recognised brands. Narrative is becoming an algorithm. In the world of Ready Player One, culture has eaten itself and become an endless repetition of archetypal signs and symbols.

Take your choice. I choose having fun and just being a cynical pillock. Nevertheless, it is a free country (or is it?).