Entering its third year the Cinema Rediscovered film festival has established itself as one of the most exciting cinematic events in Bristol’s arts calendar.  The four day festival aims to present audiences with an opportunity to re-experience a range of cinema from contemporary classics to rarities in the big screen setting they were conceived for. Here follow some personal highlights chosen from this year’s programme.

The Cinema Rediscovered film festival is far from just an exercise in nostalgia, the film selection can simply be taken as a selection of delights, they have been carefully curated an often initiates a dialogue between the films and contemporary attitudes  and issues. For example in the wake of Call Me By Your Name, for which James Ivory won best adapted screenplay at the Oscars and BAFTAs, Merchant Ivory’s Maurice (1987) can now be placed in the pantheon of queer cinema where it belongs, rather than seen as polite heritage cinema. Also screening at the festival Billy Wilder’s classic The Apartment (1960) has had it’s edges sharpened in the wake of the #metoo movement.

The festival’s Women on the Periphery strand, looks at debut films from female directors. Female voices are still marginal in filmmaking (statistics for films directed by, and written by women remain a woeful indictment of the industry’s inequality). Many of the directors whose work features in the section have tragically limited IMDB credits, a sad statement about the difficulty of financing and producing films dealing with women’s lives and points of view. However films like Blue Black Permanent (1992), Just Another Girl on the I.R.T. (1992), and Bhaji on the Beach (1993) are also a testament to the Nikean efforts of woman directors that have paved the way for the current star directors like Patty Jenkins, Ava DuVernay, and Amma Asante.

Its not just screenings. Over the festivals four days it also hosts a variety of talks (including a keynote from broadcaster and BFI Senior Curator Danny Leigh), workshops, a cinematic walking tour of Bristol, you can see what goes on in the Watershed’s projection booth, and take a trip to the Clevedon Curzon (one of the UK’s oldest cinemas) for a screening of Bill Douglas’ Comrades.

Here are some of my picks from the excellent programme, dive in:

Put against Billy Wilder’s great American films, current Hollywood comedies look terminally anaemic. A romantic comedy with teeth, the film’s protagonist C. C. “Bud” Baxter (Jack Lemmon) is a sad-sack office drone who attempts to rise the corporate ladder by allowing his bosses to use his New York apartment as a safe haven for their affairs in exchange for positive performance evaluations. Bud falls in love with an elevator operator Fran (Shirley MacLaine) unaware that she is involved in one of the extramarital affairs being conducted in his flat.

Controversial on its release for its portrayal of infidelity, The Apartment went on to win five Oscars. 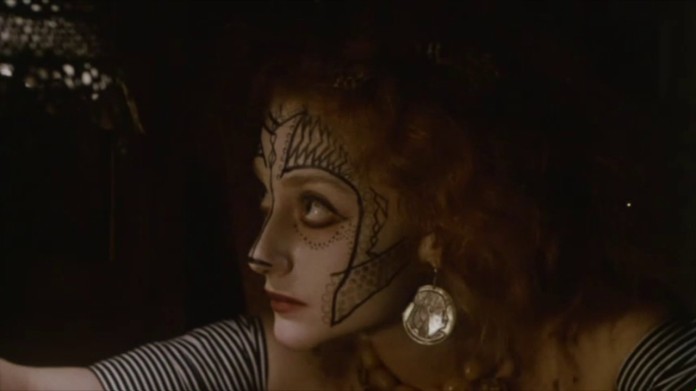 This is what Cinema Rediscovered is all about for me, a film I had literally never heard of until it appeared in the programme. One of a handful of feature films from Karen Arthur, a director who had great success in television (including an Emmy for a Cagney & Lacey episode). The Mafu Cage falls into the fertile psychotic women sub-genre that Kier-La Janisse writes about in her excellent book House of Psychotic Women. Featuring Taxi’s Carol Kane who would later star in another difficult to classify female directed horror film, Cindy Sherman’s Office Killer (1997).

As with last year’s Cinema Rediscovered screening of The Entity, The Mafu Cage is presented by The Final Girls (twitter @TheFinalGirlsUK), a collective set up to examine ‘the intersection between horror film and feminism’. If this film is even half as provocative as The Entity, this will be a screening to remember. 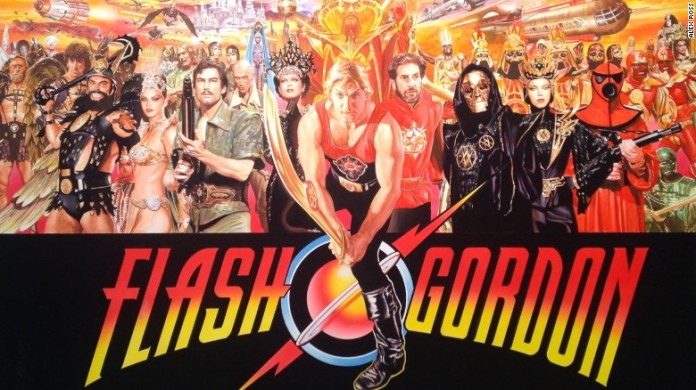 One of two massive free outdoor screenings (along with Black Panther the following evening), Flash Gordon is part of a retrospective of the work of Bristol born director Mike Hodges. A knowingly camp classic this adaptation of the thirties comic strip and film serial is a gold lame clad, pomp rock, sci fi spectacular as fun now as it was on release in 1980. Wide eyed lead performances from lantern jawed former Playgirl centrefold Sam J. Jones and Melody Anderson, are contrasted with irony laced scenery chewing from Timothy Dalton and Max von Sydow, and arguably the largest performance in cinema history from Brian Blessed. The production design is amazing. The practical effects look cooler than anything that could be cooked up in a computer. And it has the best rock soundtrack OF ALL TIME. 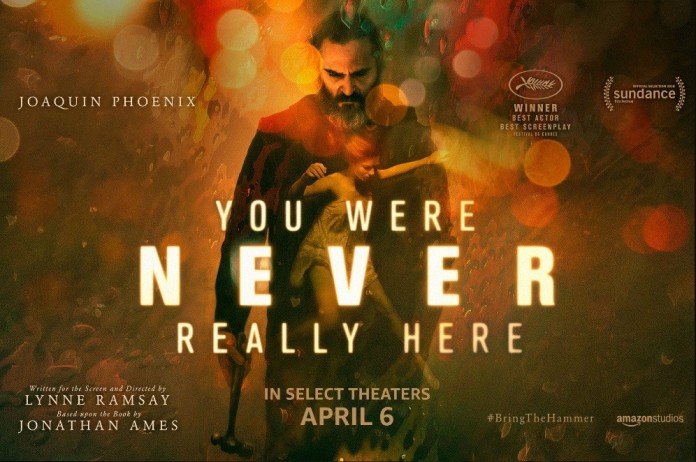 You Were Never Really Here

Why aren’t we talking about Lynne Ramsey in the same way we discuss lesser fanboy favourite directors? Ramsey has made only four features including her debut Ratcatcher (1999), but all of them are great movies. Yet her career has often seemed like an uphill struggle, dumped off her adaptation of The Lovely Bones by Peter Jackson (who made an entirely mediocre film of it) and sued by the producers of western Janes Got a Gun which she left over budget and scheduling disagreements (eventually filmed by another male director, the film was wretched).

You Were Never Really Here isn’t just Ramsey’s best film to date, it’s the best film of 2018 so far. A taut revenge movie with a superb performance by Joaquin Phoenix as a damaged war vet turned righteous hit man. The film has attracted comparisons to Taxi Driver and is good enough to survive them. It’s one of the most hard edged thrillers of the year with a pounding score from Jonny Greenwood. 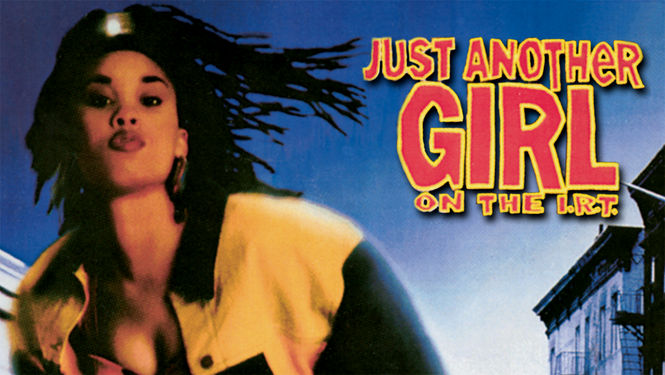 Just Another Girl on the IRT

Leslie Harris’ 1992 drama about teenage ghetto life in early nineties Brooklyn whips up social realism and hip hop into a sassy soufflé. The film is unjustly obscure, and Cinema Rediscovered offers an opportunity for a new audience to discover it. 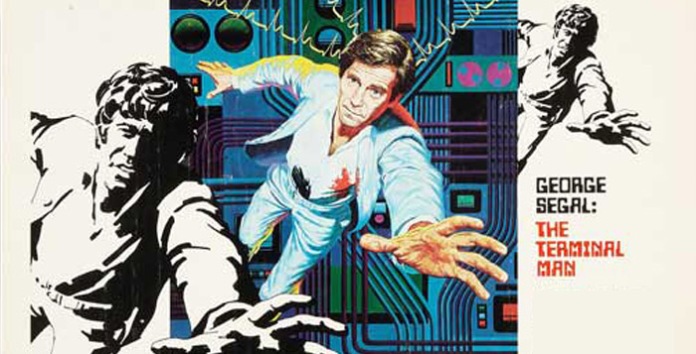 The novels of Micheal Crichton have been something of a hit factory for Hollywood, The Andromeda Strain, Westworld, Jurassic Park… but Mike Hodges 1974 thriller was barely released and little seen. It isn’t hard to see why. It stars a massively cast against type George Segal as an epileptic who submits to a radical surgical technique to cure his seizures that has horrifying side effects. The film is unrelentingly downbeat, and Hodges brings the unmistakably bleak tone of seventies British science fiction.

In another director’s hands The Terminal Man could have become an enjoyable horror thriller, but Hodges aims for tragedy and even in the more challenging new Hollywood cinema of the seventies, the film is an epic downer. The imagery is often stunning however, and Segal is terrific given the opportunity to play far outside of the light comedy box. 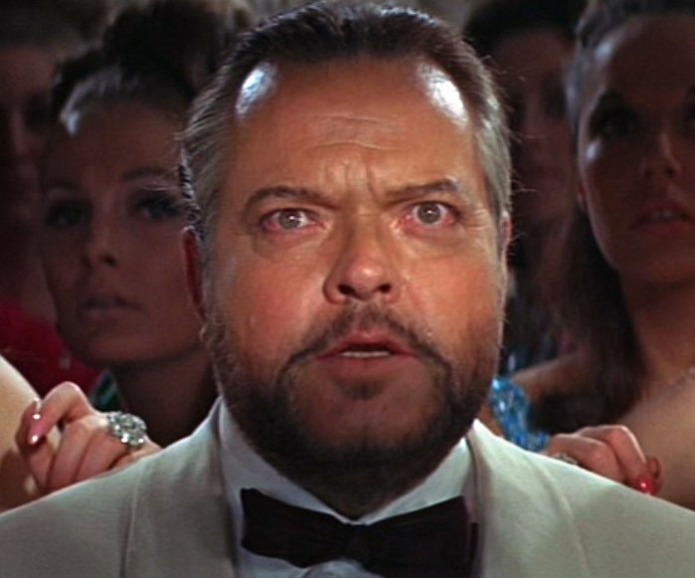 The Eyes of Orson Welles

Mark Cousins’ latest documentary focusses on the enigmatic talent of Orson Welles and promises to link Welles work to contemporary American society and politics. Welles’ most famous masterpiece is of course about a millionaire media mogul coming from inherited wealth who uses his trust fund to play politics and build a media empire, whilst vindictively attacking both political enemies and those closest to him… no, can’t see any possible parallels with anyone there.

The full festival programme and booking details is online here.