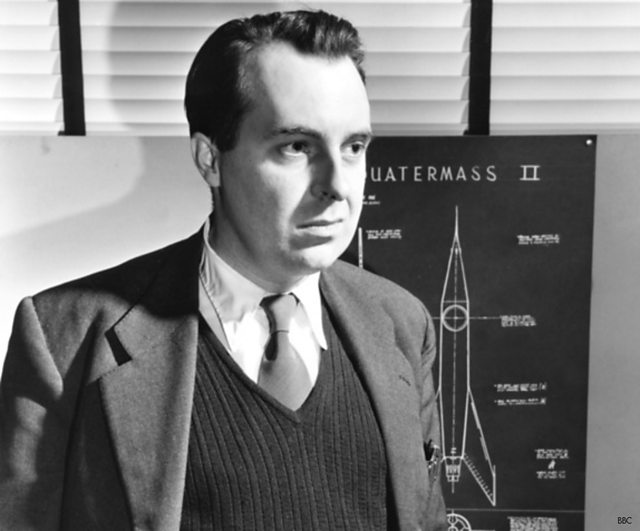 With the release of an updated version of the excellent biography Into the Unknown – the fantastic life of Nigel Kneale (Andy Murray, Headpress) this seems like a good time to burrow deep into my archives and exhume an article I wrote for the now defunct digital magazine Cult TV Times. Enjoy…

The impact that dramatist Nigel Kneale had on the development of British television drama cannot be overstated, but frustratingly his renown is far below the likes of Potter, Bleasdale, McGovern, and Bennett. This can only be because he plied his trade in the genres of Science Fiction and Horror. Writing in The Guardian in 2006 Mark Gatiss recounted his attempt to persuade the South Bank Show to devote a programme to Kneale. The pitch was rebuffed and he was told Kneale was an insufficiently important figure in British television.

Kneale’s writing career begins in the late forties writing for radio, he moved into television in 1952 after being hired as a staff writer by the Head of BBC Drama Michael Barry. Working with director Rudolph Cartier, Kneale found little to like in the television drama of the time. In later interviews it is clear he found it to be of limited ambition. Together the writer and director partnership sought to create drama that opened out the medium both in themes and in style.

Britain in the 1950s was emerging from the austerity of the post war years, rationing was gradually coming to an end (sweets were still rationed until 1954), industry was booming, the teenager was becoming a social and economic force and televising of the coronation of Elizabeth II in 1953 created a huge audience for the small screen. Kneale wanted to create drama that would reflect and examine the social and economic changes of the 1950s, he chose science fiction as the genre and Professor Bernard Quatermass was born.

Kneale’s first Quatermass serial (directed by Cartier as were the subsequent two BBC serials and Kneale’s controversial adaptation of George Orwell’s Nineteen Eighty Four (1954)), The Quatermass Experiment (1953) looked to the sky and found both wonder and terror, as a British space expedition returns with a sole survivor infected by an alien. The notion of a British Space programme sounds silly now, but this small island’s Empire dreams could just about achieve escape velocity back in fifty three.

Over six episodes the scientist hero fought to save the world using intelligence and humanity. The hopefulness of Quatermass’ first outing was well and truly extinguished in the following two stories. First, the paranoid Quatermass II (1955) in which aliens infiltrate the highest levels of the British establishment (a metaphor that never loses currency), then in Kneale’s great masterpiece Quatermass and the Pit (1958-59). 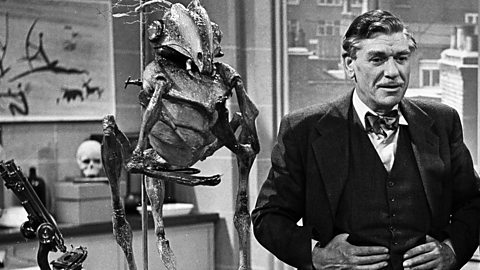 A deep connection to the ancient combined with an interest in the future runs like a mineral seam through some of Kneale’s best work. In Quatermass and the Pit this theme emerges in an incredibly sophisticated way. Quatermass has left his role in the space programme objecting to increased military control. When workers excavating a new underground line discover an object of unknown origin buried deep under London he is brought in as an adviser. This set up was recently lobotomised and recycled in The Mummy (2017).

It isn’t long before Quatermass is butting heads with the military as the extraterrestrial nature of the find emerges. The find is some kind of space craft, and it contains the mummified remains of an insectoid species. Although long dead, the alien remains seem to exert a malign influence on all who come into close proximity. From the uncanny events in the dig, Quatermass brilliantly extrapolates the origins of both human intelligence and the notion of the devil.

Quatermass was an enormous hit for the BBC, in fact the success of The Quatermass Experiment led to Hammer Films taking and interest and adapting the serials to film introducing the character to an international audience with The Quatermass Xperiment (1955), Quatermass II (1957), and Quatermass and the Pit (1967). Kneale himself was not enthused with the adaptations, in particular objecting to the casting of American actor Brian Donleavy as his hero in the first two films. Kneale himself revived the character on ITV with Sir John Mills in the lead in Quatermass (1979) in a story that clearly influenced Russell T. Davis’ Torchwood: Children of Earth (2008). In his final appearance to date The Quatermass Experiment was remade ‘live’ by the BBC in 2005 with Jason Flemyng in the lead role and Mark Gatiss in the cast. There was been further talk of a new Quatermass from the revived Hammer Studios but news has been quiet for the past few years. In a time when the dominant form of government in the UK and US seems to be the idiocracy and expertise is mocked, we need Professor Quatermass more than ever.

Kneale’s love of combining science and the supernatural again also appeared in The Road (1963). In this television play an 18th century community is terrorised by apparitions revealed in a final twist to be the psychic echoes of a nuclear holocaust projected back through time. Sadly the tapes of The Road were wiped by the BBC and it is now believed lost.

Literary adaptation Nineteen Eighty-Four (1965) starring Peter Cushing, was controversial upon broadcast. Viewer complaints about disturbing content lead to questions in Parliament. A bizarre twist to the furore came when the Queen and Prince Philip made it public that they had enjoyed the broadcast (after which the hullabaloo jolly well died orf). Whether the controversy inspired Kneale’s next major work is unclear, but the very title The Year of the Sex Olympics (1968) seems like a dare to ‘disgusted of Tunbridge Wells’. A science fiction story set in a socially divided future. The ‘low-drive’ proletariat are subdued by broadcasts of live pornography and passively serve the ‘high-drive’ ruling class. An accidental sensation is caused by a spectator’s death on camera, this leads to the commissioning of The Live Life Show, a live interrupted broadcast following a group of people marooned on an island. Worried about falling ratings the producer deliberately introduces a psychopath. How ahead of the curve was Kneale here?

The Stone Tape (1972) was broadcast as one of the BBC’s traditional Christmas ghost stories. Here Kneale again returned his favourite science vs. the supernatural theme with a deceptively classic haunted house story. In doing so he introduced the concept of ‘residual haunting’. Scientists and engineers attempting to develop an new data storage medium discover the mansion in which their research lab is based is haunted, and the apparition is connected to the building’s masonry which is acts like a recording medium, absorbing the psychic disturbance of a terrible event in the past, and playing it back to anyone ‘sensitive’ enough. This concept was so compelling it has become adopted as fact by paranormal investigators.

Two particularly fine plays written for ITV further show the writer’s preoccupation with ancient Albion and the failure of modernity to expand its borders to encompass ideas and events which it cannot easily explain. Along with The Stone Tape, these firmly place Kneale alongside The Wicker Man (1973) director Robin Hardy and writer Anthony Shaffer as a key progenitor of the sub genre of ‘folk horror’.

In the truly unsettling Murrain (1975) a young vet is sent by the Ministry of Agriculture to investigate a spate of livestock deaths. He finds nothing that is not contradict the assessment that the animals contracted a viral disease. However the locals (whom the vet regards with polite condescension) believe they are afflicted by a curse cast upon the land by an elderly woman shunned in the local village. Murrain moves folk horror away from the almost tourist board imagery of the Western Isles seen in The Wicker Man, to a drab, overcast rural England where the land is diseased. 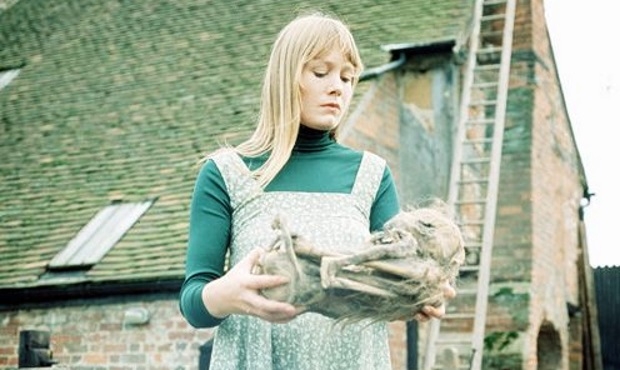 In Baby (1976), an episode of Kneale’s ITV anthology series Beasts, a young couple move into a rural cottage. The husband has a new job with the local veterinary practice and his wife is pregnant. During renovations a very old clay pot is discovered inside a wall. In the pot is the mummified remains of something that looks like a cross between a pig and a monkey. The wife is horrified, but her husband thinks it is something fascinating to show to his boss. The local workmen advise destroying the… thing. They tell dark tales of the land around the cottage being barren. Again, modern man arrogantly secure in his beliefs ignores all warnings with dire consequences.

Kneale’s reputation crossed the Atlantic. One can only speculate about a John Landis remake of Creature from the Black Lagoon he was rumoured to have been approached to script, but it is well known that he was hired to write Halloween III: The Season of the Witch (1982) by then attached director Joe Dante. Serious disagreements with producer Dino De Laurentiis – who demanded more gore and more violence – saw the writer depart the project. 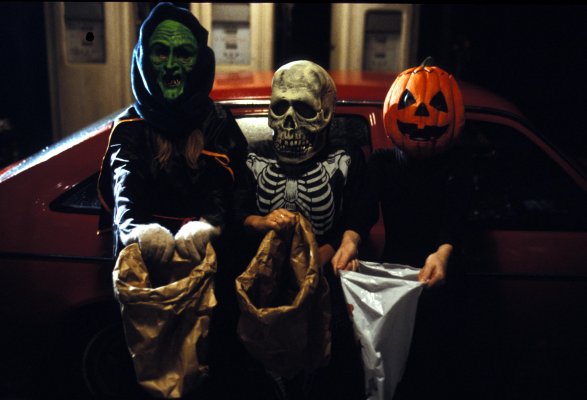 In the film an Irish toymaker and worshipper of the old gods is repulsed by modern capitalism’s debasement of the pagan tradition of Hallowe’en. To remind the world of its true meaning he puts shards of ancient stone impregnated with a spell into a range of aggressively marketed children’s horror masks. A hidden message in a Halloween TV broadcast will trigger the spell with horrific results. Halloween III may not carry Kneale’s name but it unmistakably expresses his themes. John Carpenter himself later acknowledged Kneale’s influence with his 1987 film Prince of Darkness by crediting his script to the pseudonym Martin Quatermass.

Kneale’s career continued into the late nineties, including Sharpe’s Gold (1995) and the Kavanagh QC story Ancient History (1997), but his final great work was an adaptation of Susan Hill’s supernatural novel The Woman in Black (1989). For a writer who was fiercely protective of his own work, and critical of its adaptation, Kneale was quite happy to alter the work of others, and among changes to Hill’s story was a bizarre decision to change the lead character’s name from Kipps to Kidd. In the biography Into the Unknown – The Fantastic Life of Nigel Kneale genre critic Kim Newman claims this was due to Kneale’s objection to the character sharing the name of an HG Wells character. The drama is also notable for featuring a very young Andy Nyman in a small role. Kneale’s version is arguable more chilling and scarier than either the long running stage version or the 2012 Hammer film starring Daniel Radcliffe. Kneale’s version of the tale is a long slow build up to a moment of exquisite dread and terror.

Kneale is a key figure in the history of twentieth century British speculative fiction. He was able to see his work be hugely impactful in his own lifetime. Those early Quatermass serials gripped and terrified a nation in much the same way the Terry Nation’s Daleks sent the next generation scurrying behind the sofa. In addition to Gatiss and Carpenter, he has been acknowledged as an influence by Stephen King (whose novel The Tommyknockers borrows heavily from Quatermass and the Pit), Alien writer Dan O’Bannon, Monty Python’s Michael Palin, and Chris Carter the creator of The X Files (in fact Kneale was approached to script an episode, but turned the offer down).

Along with a potential Quatermass reboot, there is tremendous potential for new interpretations of Kneale stories. Who wouldn’t be interested in a remake of The Road directed by someone like Ben Wheatley or Peter Strickland? In fact Strickland directed a 2015 BBC Radio version of The Stone Tape.

The strength of Kneale’s best genre work is that the technical limitations of the day are simply irrelevant, as he was a rare writer who could be provocative and terrifying with an idea.